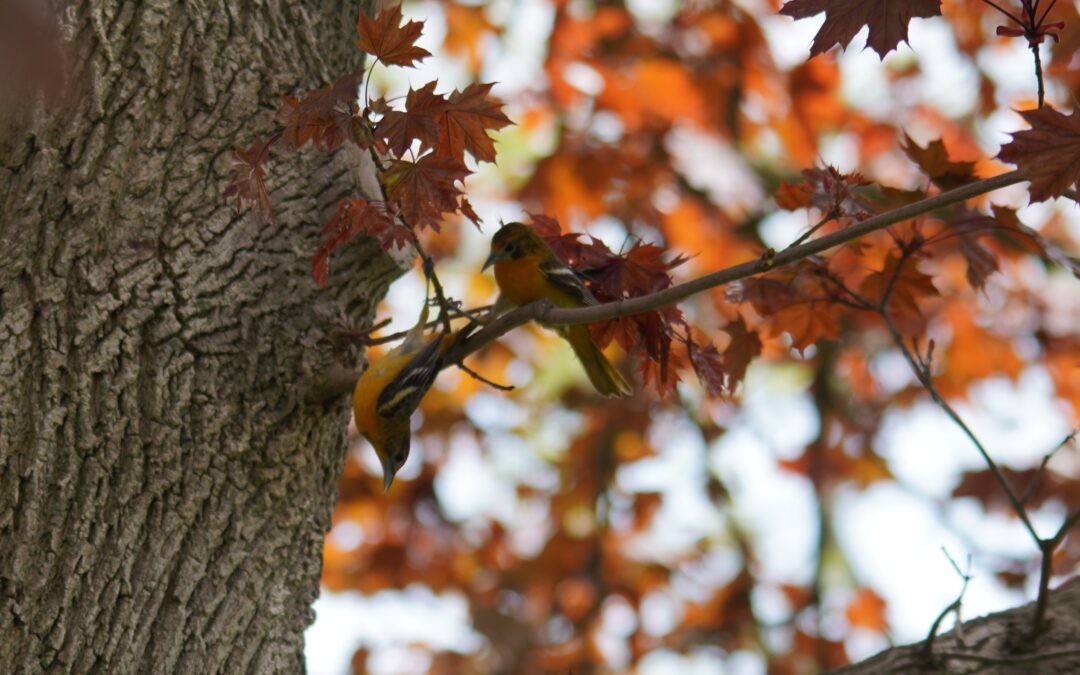 Hi and welcome back! What kinds of birds have you been seeing in your backyard? Have you seen any nests or baby birds? This week we are talking all about babies, since many bird species have started laying their eggs. You might have noticed pieces of broken shells on the ground or bird couples in your backyard with their babies already in tow.

I have been watching a couple of Mourning Doves in my backyard for a few weeks now. During my observations I have seen them collecting branches to build their nest, searching for food on the ground and mating in the tree. A couple of weeks ago they began to take turns sitting on the nest. Every time I looked out the window, rain or shine, one of the doves was resting quietly on the nest. They never called to each other, but I could see the other dove hanging around close by keeping an eye on the nest from afar. 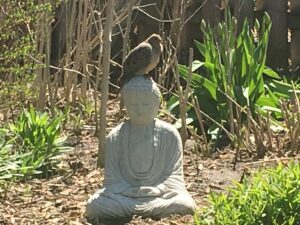 Mourning Doves take turns sitting on the nest and when the babies hatch, they take equal
turns feeding the young. It has been observed that the male sits on the nest during the day and the female sits on the nest at nighttime. When a bird sits on its nest to hatch the eggs it is called brooding. I was so proud of them for building their nest and it seemed so special that I was able to watch them. I stopped using my hammock outside so that I wouldn’t disturb the tree that they were in and I filled the nearby birdbath with fresh water each day to try and make a nice environment for hatching the eggs. Sitting on the nest all day long is hard work! The days became very hot and sometimes very rainy, still they diligently took turns brooding.
After about two weeks had passed, I started to wonder why nothing was happening, they were sitting and taking turns and their nest looked nice and sturdy but still there were no babies. They continued to occupy the nest for five more days and then all of a sudden, they were gone. I began to wonder what went wrong, and as I learned more about Mourning Doves, I became aware that there are many factors that determine whether or not a bird is successful in raising a clutch of eggs. These factors can span from simple infertility to threats from predators, but also different environmental aggressors such as insect infestation and harsh weather. 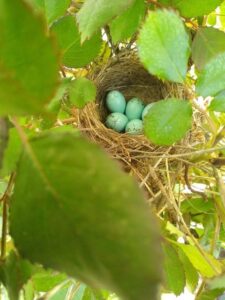 Although it is unlikely that I will know the cause of the failed nest there has still been much excitement in my backyard as a nest of Common Grackles nearby were very successful in raising their young. I have been watching them learn to navigate through the trees and fly
onto the telephone pole. One of my favourite things to watch is when they are out foraging for food. The fledgling grackles hop behind the adult and make sounds demanding food. It is so funny to see them try to pick up things to eat and become frustrated, chirping to ask their parent to help. This is good practice for them as they learn what is and isn’t a tasty snack. 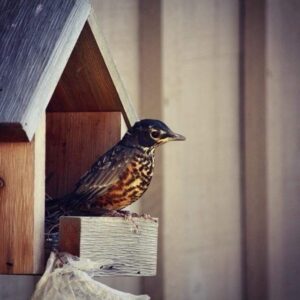 I have been asking my friends and family about bird babies in their backyards as well! One friend has been observing a pigeon nest on a balcony as the eggs hatched and the babies grew up. Now the nest is empty, and the baby birds are big enough to fly and care for themselves. Another friend spotted a nest in the trees while out in the garden and shared a photo with me. The strangest nest was built by a Mourning Dove in an air vent! On my walks I have been keeping my eyes on the ground under trees to see broken eggshells from successful hatches. I have seen white eggs, blue eggs, speckled eggs and even a whole unbroken egg. Nature’s processes are long established and there are many occasions when things don’t go quite according to plan– like the doves’ abandoned nest or a whole fallen egg. 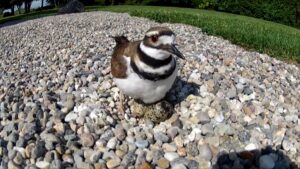 Sometimes it feels like we as humans need to intervene in order to help the birds along, but truly our role is to create as little interference with birds who are living out their lives in their own ways. We can count on birds to be great parents and do what’s best for their young. Really the only time we need to help them is by offering safe nest sites, some yummy treats at our feeder and keeping our distance. I hope you’ve been lucky enough to watch baby birds come to life and witness all their different stages of growth. Keep an eye out for babies all summer long as many bird species raise multiple clutches over the course of the summer. Happy birding!